Day 7 Barcelona, SpainMorning8 AM – 10 AM (Disembarkation)

Malaga, together with adjacent towns and municipalities such as Rincon de la Victoria, Torremolinos, Benalmadena, Fuengirola, Alhaurin de la Torre, Mijas and Marbella, forms the Malaga metropolitan area. The important cultural infrastructure and the rich artistic heritage have culminated in the nomination of Malaga as a candidate for the 2016 European Capital of Culture. The internationally acclaimed painter and sculptor Pablo Picasso and actor Antonio Banderas were both born in Malaga. SeaDream calls to Malaga both as a embarkation point as well as a typical port of call. Kindly check on the land adventures tab to see all of the activities and options. Should you need embarkation information, it’s also available there.

Cartagena was founded in the 3rd century BC and has been a major naval station. It is located in the Region of Murcia, southeastern Spain. Thanks to its strategic position on the Mediterranean, Cartagena has been inhabited by many different cultures which have left their mark on its rich cultural heritage during a glorious and turbulent history. It’s a very pleasant and relaxing city to walk around. SeaDream makes it easy is the yacht docks in the center of town. Guests have an option of a walking discovery adventure as well as resort golf at La Manga. Some guests also enjoy independent usage of the mountain bikes.

Valencia is the third largest city in Spain after Madrid and Barcelona. It has more than 2.5 million inhabitants in the metropolitan area. The city is recognized globally partly due to its Unesco Heritage Status as well as the City of Arts and Sciences. The Port of Valencia is a very busy commercial port. It is the 5th busiest container port in Europe and the largest on the Mediterranean. SeaDream docks as close to the city center as possible – just along the Grand Prix raceway. SeaDream offers both day trips as well as a very popular evening adventure called “Valencia Buzzes at Night”.

Ibiza town is the largest city on this 3rd largest Balearic Spanish Island. It lies 79 kilometers (49 miles) off the coast of Valencia, in eastern Spain. Ibiza has become famous for its incredible nightlife and the electronic music that originated on the island. This Unesco awarded city has some great land adventure options including resort golf, winetasting, exploring the Dalt Villa and mountain biking to name a few. We try to stay late in the evening so guests can also get a taste of the nightlife.

Although the City of Palma is the commercial and cultural center of Majorca, the depth of history, culture and nightlife here often takes visitors by surprise. Nestled in Bay of Palma in the southwest corner of the island, Palma is not short on attractive quarters or absorbing sights. Palma has an enormously grand Gothic cathedral called the Seu, which rises dauntingly above the city. In certain areas, the remains of the medieval walls that once protected the city from pirates can still be seen. Palma has some excellent shopping in the boutiques and department stores that line the smarter streets as well as some of the traditional markets. Kindly check the land adventures tab to see what options are available.

Mahón (also known as Maó) is the capital of the Balearic Island of Menorca. The arrival by sea is really incredible as the Captain enters via a fjord like inlet and then turns that yacht around and docks in the heart of the city. The capital has an interesting mix of old and new architectural styles. SeaDream has arranged 4 separate and very unique yachting land adventures that include Golf, Kayaking, Mountain Biking and “

Barcelona, a Unesco Awarded City is the second largest in Spain. It was the 12th-most-visited city in the world and 4th most visited in Europe after London, Paris and Rome. Especially remarkable is the work of architect Antoni Gaudi¬, which can be seen throughout the city. His best known work is the immense but still unfinished church of the Sagrada Fami¬lia, which has been under construction since 1882, and is still financed by private donations. Completion is planned for 2026. SeaDream almost always docks downtown at the World Trade Center and is steps away from the famous boulevard of La Rambla. SeaDream has several land adventure options for you, whether this is a port of call or an embarkation point, kindly check the land adventures tab for all of the details including transfers and private options.

“Book Today and Save” fares are capacity controlled and may change without notice. The fares are per person based on double occupancy. Single and third person rates are also available. SeaDream Yacht Club strongly recommends that all guests purchase travel insurance.

Single Supplement for this voyage is 200% for Yacht Club Deck 2,3 and 4. For Commodore, Admiral and Owners Suite, a 200% single supplement rate applies. 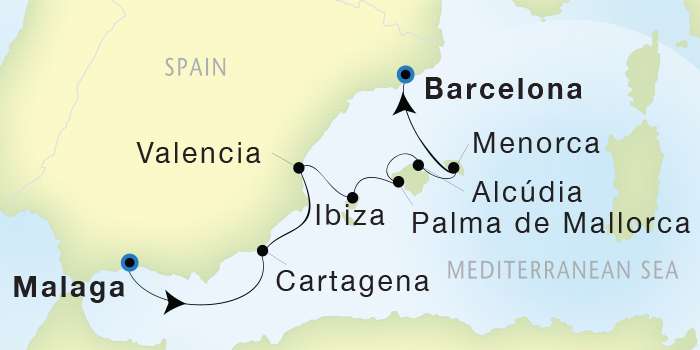 Find Out more about the ship here